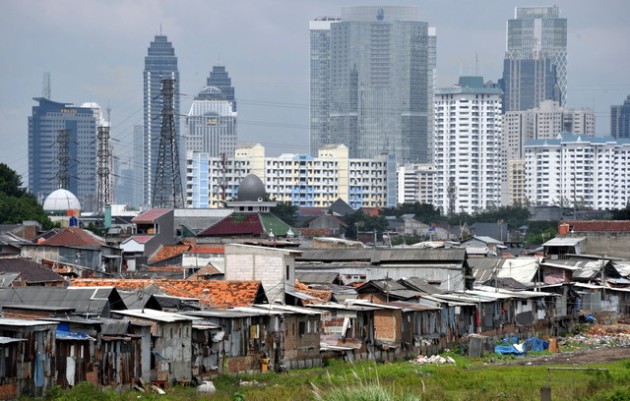 Jakarta’s slums and the place of residence of many of Jakarta’s poor working class. Photo Businessweek.com

Those that live in Jakarta will have noticed the occasional snobbery and anti-egalitarianism of some of the middle class and orang kaya baru crowd (the new rich, who aren’t actually “rich” at all). As Indonesia’s middle class emerged in the 1990s, some hoped that the issues of the redistribution of wealth in society would become a point of interest for the class. It clearly hasn’t. In fact the markers of inequality are ironically more distinct than ever.

I sometimes chat with the pembantu (housemaids) of the apartment complex where I live in Jakarta as I get breakfast on my way out into Jakarta’s mind boggling traffic in the morning (made worse daily by the increasing numbers of sedans on the raod). They gather in the sun to nurse the babies of their middle-class employees downstairs while their boss sits idly nearby playing with their smartphone, probably tweeting about politics, poverty, environmentalism or democracy.

I asked one of the young pembantu what she thought about the upcoming last week, to which she replied “I voted for the party my boss asked me to vote for because I don’t undestand”, at which I choked a little on my gorengan and replied with a polite but loaded “good”. Another said her boss said it wasn’t important for her to vote and that they needed her to stay at home to look after their (overpampered brat of a) child.

People pay their pembantu between $50 and $200 a month here. They are a symbol of status and as having made it as a middle-class Indonesian. They are live in maids, who usually live a converted laundry-like room at the back of the house or on the floor of the ‘loungeroom’ of the box-like apartments Jakarta’s middle class increasingly favour.

The apartment complex where I live is chock full of middle class Indonesians who perceive themselves to have made it, simply because they live in an ‘apartment’ which is actually more like a broom closet. But hey., they can say they live in an apartment with a pembantu to trail behind the while they wander aimlessly around the mall downstairs.

Meet Indonesia’s aspirational middle class. Indonesia is big, but it’s growing economy is bigger. Indonesia is the world’s 16th largest economy (Australia is 12th), and the transition of millions of Indonesians out of poverty into a middle or ‘consuming class’ is a big part of that growth story.

But, the reality is, this emerging middle class is actually still very poor. But this class cherish the class markers that distinguish them from their “lower class” fellow Indonesians.

The so-called consuming class commentators are getting so excited about is comprised of households with earnings of just US$7500 per year at purchasing power parity rates. But that’s still enough to afford a broom closet apartment and a live in maid (God knows where these poor girls sleep. Sometimes they go home to the slum areas of Jakarta each night by the rivers or under the highway toll bridges).

The world is cheering on Indonesia’s emerging middle class as the potential flagbearers of Indonesia’s democracy, but this society still has a long way to go with it’s dated notions of elitism and the illusions of prosperity propped up by an atrocious lack of economic equality and a class of working poor living on less than $2 a day.